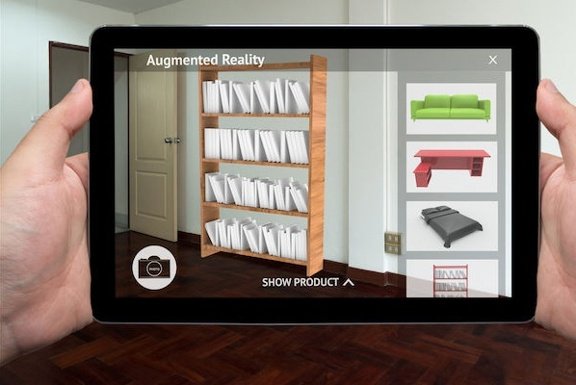 Augmented Reality in E-Commerce – Who is in the race in 2018?

The world of augmented reality is rapidly evolving for the e-commerce segment and 2018 is expected to be a landmark year.

The technology which blends physical world with the virtual world, has been widely acclaimed and adopted by the users, worldwide. Augmented reality is expected to acquire 1 billion users by 2020 and the market value is expected to reach $61.4 billion by 2023, growing at a CAGR of 55.7% during the forecasted period. Thanks to the groundbreaking innovations bought by the technology giants like Apple, Google, and Facebook among others. Let’s look at the leading players in the segment this year.AR Software Development Kits (SDK) are software which allow developers to create augmented reality applications for various operating systems, and here are some of the biggest and most popular names:

Apple introduced ARKit for iOS devices last year, which lately announced an update and launched version 1.5 that supports vertical spaces around you, along with the horizontal spaces which was featured in the previous version.

Google has brought its augmented reality SDK, ARCore to its version 1.0 release with availability on over 100 million android devices. ARCore 1.0 has improved environmental understanding that enables users to place virtual assets on textured surfaces.

Vuforia is one of the industry’s most advanced and widely used platforms for developers to build augmented reality applications, which supports Android, iOS, and UWP. The software features recognition of physical objects, text, environment and VuMark (combination of picture and QR code).
Wikitude, one of the world’s leading mobile AR technology providers, that features multiple functionalities like image recognition and tracking, 3D tracking technology, geo data, and cloud recognition etc.

Empowered by the augmented reality SDK providers, there have been many eCommerce players who embraced the revolutionary trend in order to offer better shopping experience to their customers.

IKEA, the world’s largest furniture retailer and one of the early adopters of AR, introduced ‘IKEA Place’ that lets you virtually place IKEA products into your room or office and see how they would look like in the real world. The app makes sure the furniture you see on it are true to scale and represents the right size, design and functionality.

Overstock.com, an American internet retailer, has recently incorporated the next phase of online shopping – augmented reality, into its app for both iOS and Android. The company believes augmented reality will influence consumers’ experience significantly who shop for home products.

Wayfair Inc., that sells home goods, launched apps that show some of their products in augmented reality. Previously the company offered this feature named “View in Room 3D” for iOS devices and now they are using Google’s ARCore and providing the same to Android users.

With the launch of Apple’s ARKit for iOS 11, build.com, an online home retailer, realized the opportunity to use augmented reality and introduced ‘In-Home Preview’, a new AR feature that provides real life experience of interacting with various appliances, virtually. It doesn’t just allow placing products, but also shows how they exactly work – like from turning on light fixtures, to adjusting a faucet and see the flow of water through it in different temperatures.

Home Depot, an American home improvement retailing company, enables shoppers search for a product in stores faster through augmented reality, visual search and real-time inventory availability. The app identifies when shoppers visit a Home Depot store and guides them to the desired product location. The augmented reality feature works for furniture, doors, faucets and lot of other products.

Houzz, a home decor company, also leveraged the augmented reality to offer “View in My 3D Room” option in the mobile app that lets users see a digital object in a real-world environment. Currently, it has created a catalog of over 500,000 images for their users to view, move and install products in their virtual rooms.

With augmented reality becoming a trending buzzword in the digital world in the past couple of years, many AR technology providers have emerged in the market. It needs right knowledge of technology and domain expertise for the AR companies to harness the power of this transformational element and build innovative applications.

At SuperDNA 3D Lab, we strive to uplift the customer experience for eCommerce companies by leveraging digital technologies. We successfully crafted over 10,000 models, specifically for the furniture and ‘Do It Yourself’ market. Within a few weeks, we are launching our new AR application for the ecommerce companies.

Our aim is very simple – we want to create in-store experience for your customers online and empower them to shop with confidence, and eventually help you grow in the competitive marketplace. Like handful of companies, we put quality first – 40% of our investment goes into quality assurance. We have worked with one of the biggest and most successful ecommerce players and delivered high-quality products at competitive prices.

Reach us to outshine from your competitors and  let us partner in your online journey!